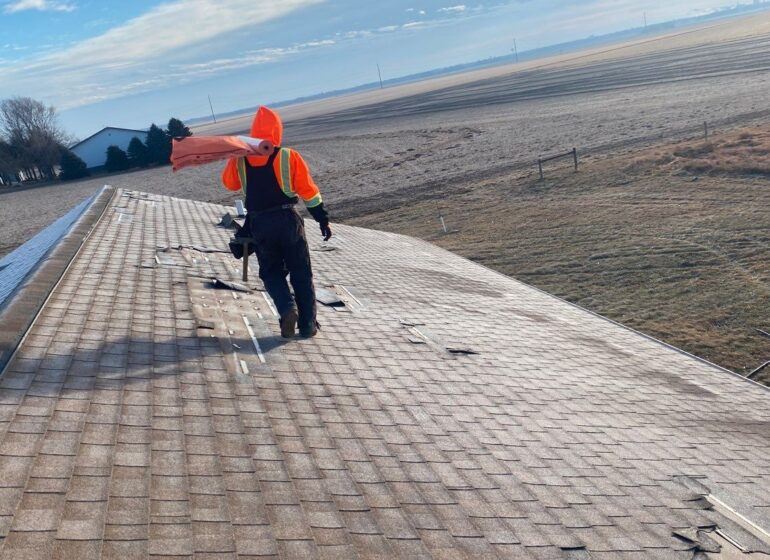 Young Construction has been Iowa’s roofing leader for over 20 years. We haven’t just been nailing roofs. We’ve been giving back, growing relationships, constantly learning and building our reputation as your home exterior experts.

My name’s Dan Young, Owner of Young Construction. Today, I’m sitting here today with Angelica. She is our Senior Estimator for Young Construction, which basically means she handles most of our insurance stuff. Today we’re going to be covering the serial derecho. We had a bigger one over in Cedar Rapids.

Yeah, that was August 10th, 2020. That one was, was huge. This one was spread out. The Derecho in August of 2020 pretty much went across the state. This one kind of went diagonally.

It covered over a 250-mile radius. Winds were 58 miles an hour or greater. There were 75 mile per hour winds, and there were 21 tornadoes. There were a hundred thousand homes, that were out of power and a disaster was declared at 43 counties. Rudd was hit with an, with an F1 tornado with wind speeds at 73 to 112 miles per hour. Angelica had gone out with my wife, right after it was done. Go ahead and explain what you first saw.

At that point we didn’t even know it was a tornado. It wasn’t even confirmed that it was a tornado until days later. But I had gotten a message from a friend that lived in Rudd telling me that their roof had been impacted. So, I told Tami, “Hey, let’s go check it out. Maybe they need our help. Let’s go see what we can do.” The closer we got to Ruff, the more we saw the fire trucks, blocking off each entry and then you could see debris just dragged across the road from the buildings. I was shocked to see that, because I was expecting to go there and just see like a roof lifted off of a building. But there were houses wiped down to the ground, completely gone.

It’s amazing that there weren’t more people that got hurt or killed, to be honest. We sent people out the next day to volunteer, to help pick-up and clean-up. We set aside our business for a little while. I think that’s important. There are a lot of other people that do what we do in the community and I think stepping up is critical. You can always come in and do business later.

I feel like for people here in the Midwest to instantly just jump in and see what we can do to help. There was numerous businesses and churches that stepped in immediately and were there as soon as the sun came up to help remove damage.

I want to touch base again on the term Derecho. It’s not a very common type of storm. I didn’t even know what it was hardly a few years ago. To break it down into basic terms – it’s a land hurricane without water. The winds, the destruction, the devastation is the same in some circumstances, even worse.

We’re receiving literally hundreds of calls so far of people that are noticing that they’re missing a shingle or a piece of their siding. They’ve given us a call to go out and take a look, because it’s what they can see. But it’s the unseen damage that is more concerning because people aren’t addressing those issues right away.

When you have 130 mile per hour winds and the shingle lifts up, the seal is broken. It’s not going to seal back down. If you get ice and snow, like we do in the Midwest here, that ice fills the crack and, in the spring, has an easy way to melt into your house. The unseen damages from a Derecho to your installation is important as well. So, what happens is it comes in on one side of the roof and it blows your insulation all the way over to the other side and plugs the vents on the other side. So, if you’re sitting in your house and you notice either a wet spot or it’s colder than usual, give us a call, get a free inspection. We remove installation damaged and we blow it back in. It has to be done this way. You can’t just go out and rake the installation across. It will still have blocked vents. Your house will not be breathing properly and you need somebody to take care of that.

We can come out and protect your roof through winter. Our synthetic felts that we put on top of the roof will get you through the winter. I will turn it over to Angelica here. She’ll explain some of the things that can go on with this on the insurance side.

Just last week, Eric and I went on a roof and Eric’s one of our project managers and I did a live video. It’s a great example showing what unseen damage looks like on your roof. When we were up there, he went through multiple areas in which and showed where the shingle came unsealed just a little bit. And then what happens over time. It turns into big chunks of shingles lifting in huge sections. But if you were looking at it from the ground up, or even just walking on the road, you would never even know that you had all that damage. The reason you would notice is when your roof starts to leak over time from that unseen broken seal. Once you have that water in there, then you end up having all that secondary damage.

Just patching in a shingle and leaving all the other shingles, is not how your roof was before the storm came. You don’t have the same roof. If you just do that a year later, six months later, you’ll have a leak.

Right. And actually, with that specific Eric and I went on the adjuster had only bought one side of the roof, which it was the side with obvious damage, but then after Eric’s initial inspection up there, he noticed multiple areas. At that time, he was like, “Hey, we need to have the adjuster come out and look at this again because you have unseen damage on all these other slopes.” If it wasn’t for Eric going up there and getting the pictures and getting the information that he needed to have another adjuster come back out and do another inspection, that roof would have only had one side redone.

That’s the key, having a reliable person come and assess the damages. We’re here for you. That’s our job. If your roof is completely damaged, you should have it replaced. That’s why you need to find a contractor that knows how to handle or to deal with insurance, to make sure that you’re adequately covered.

I’ve been trained to do this. To learn the insurance language and software to make sure that we’re able to do what we can do to our best of ability and to make sure you’re taken care of as our customer.

At this point you may be wondering, “Hey, do I have damage? What do I do now?” Give us a call. 641-454-6330. We have an emergency line that you can get through. There’s always somebody you can contact. We’ll get you set up and, if there’s no damage, there’s no damage. But it doesn’t cost anything to find out. And if you do have exposed shingles, you want to make sure you get those tarped up and sealed before we get deep into this winter.

I appreciate your time. Thank you for giving us this opportunity to educate you. Give us a call 641-454-6330. Get us on your to-do list for 2022 to go out and have your exterior, properly inspected by one of our experts here at Young Construction.

Young Construction Team
Related Posts
Leaking Roof? Here’s What You Should Do

Leaking roofs can happen at nearly any time for a variety of reasons, such as… View Article Read More

Expert Tips on Taking Care of a Leaking Roof

A leaking roof is a problem that many homeowners face at some point. If left… View Article Read More

A Basic Introduction to Gable Roofs

When asked to draw their idea of a typical house, most people will draw a… View Article Read More