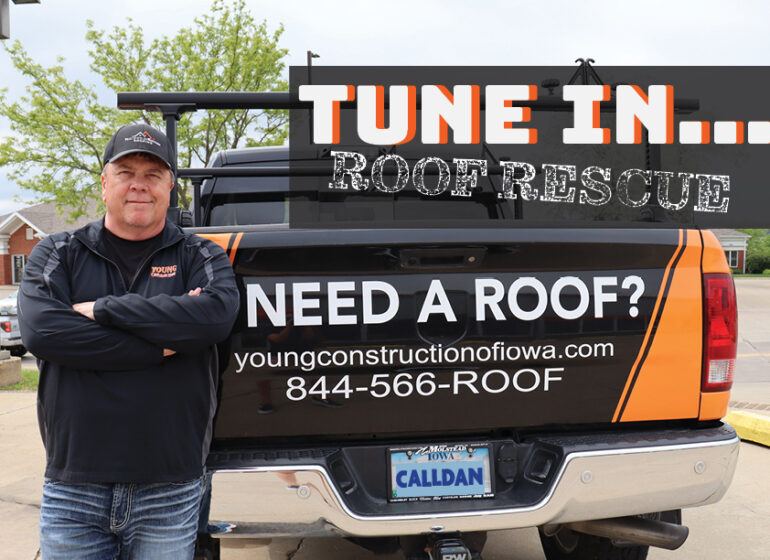 Young Construction has been Iowa’s roofing leader for over 20 years. We haven’t just been nailing roofs. We’ve been giving back growing relationships, constantly learning and building a reputation as your home, exterior experts, your home experts.
Welcome back. Last time we talked about giving back to the communities that we serve. This time we’re going to expand on the YC Cares program that Young Construction has. Let’s talk about the YC Roof Rescue.

What exactly is a RoofRescue?

We came up with the YC RoofRescue, mainly because there are certain people that for one reason or another, couldn’t come up with the money to do a roof. You’ll have a homeowner that’s really struggling, roof’s leaking and they can not come up with the financing. It’s, such an important part – your house, that you’re in every day, every night. Some of them were leaking so bad that you’d see mold. We saw the need and thought, you know what? The community’s been good to us. Let’s listen. Try to hit the people that fall between the cracks.

Anybody qualifies. You can nominate somebody, you can nominate yourself. It doesn’t matter. We narrow it down to three, and from those three, we let the community vote. What I like about it is, it goes towards people that may have not got a break. They’re hard workers, but it was just a hard year or they have medical problems or insurance lapsed. You just don’t always know somebody’s situation and it’s really cool that you guys let the community vote on the finalist because the community can rally behind these families.

It’s all good natured competition because if you’re one of the nominations, you’ll get ahold of your friends, you’ll see people that support your circle. What is shocking is once you do this you see how many people have this need. It’s hard getting down to three.
Because you get a hundred nominations some years. That is probably the most difficult part – choosing between all those. I know that you still gave a free roof during COVID. Why do you think it was important to still do that, even though you guys were struggling and, the whole community was struggling and nobody knew what to do.

You know, even with COVID we still did the Christmas shopping spree even. Life didn’t stop. The Derecho happened up in Cedar Rapids and you had numerous people that found out that, they weren’t going to get everything covered and so forth. So, there’s no reason not to be able to be there. You guys definitely stand behind your word. If you say you’re going to do something, you’ll do it even if it’s a tough year. You talk a lot about building a brand as a company, and fulfilling what you say you’re going to do is a big part of that.

I think you get more back. You know, that feeling you get, when you do what’s right. It might not have been that big of a thing, but to them it was everything.And we’re lucky this year, Young Construction is doing two RoofRescues. The original rescue goes to anybody. This year you decided to also do specifically a roof to a veteran.

What, sparked the idea to give it to a veteran?

We’re Platinum Preferred Contractors with Owens Corning, which is a product that I believe in and they have a Roof Deployment Program. When I started the company, I wanted to make sure I was picking a product that I felt would stand behind me and they have. There’s a lot of people in need that serve our country. You know, if somebody goes and serves your country for you to have the freedom that you have, the least we can do is celebrate them. Another factor too, with older veterans, they’re tough, they can do it on their own. They’ll fix the leak, they’ll fix the patch. They don’t want to ask for anything from anybody when they are the ones that we should definitely be helping.

I’m a big fan of, what you just said, doing it on your own and not asking for help. I look at this differently. It seems nowadays that we need to give more back to our country. We need to be proud of the country that we’re in. As my company grows, I want to make sure that we’re giving back. There is such a misconception about how blessed our country is. I think that somehow to be perfectly honest, that a lot of people in this country have forgotten how lucky we are and it’s because of our veterans that we are free. And that we’re able to have what we have. I don’t think it gets brought up enough. We have active service people in our workplace. I mean, it’s a part of our company and it’s a part of the country. We’re lucky that we are able to do this program this year and we definitely see a need in that area. I was surprised in a good way that we had such a high turn out. There’s nothing better than to help somebody that’s not even really asking, you know? That’s something that’s mirrored in both of the rescues. When we read the nominations for the regular rescue and the veterans one, the people who nominate them, love them unconditionally. You can just feel that they are amazing people.

I’ve had numerous times where you call on them, they start crying and it’s because of the conditions of the house or whatever their situation may be. It’s just that little bit of a break. I think everybody needs a little break.

There’s no cost to anybody. There’s a lot to look forward to this summer.

has been Iowa’s roofing leader for over 20 years. We haven’t just been nailing roofs…. View Article Read More

Today, we’re going to be diving into the importance of giving back to the communities… View Article Read More